History of the Magic Lantern 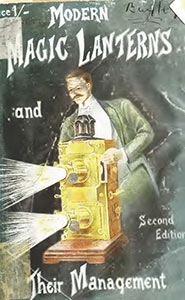 Most people today have never heard of, or let alone seen, a Magic Lantern Show. Well, you’re in for a rare treat!

Just as silent movies were almost lost to history until their “discovery” a few years ago, Magic Lantern entertainment “before the movies” has indeed all but disappeared. Thanks to The American Magic-Lantern Theater and its partnership with the Amish Experience, these live shows can now be experienced again at the Plain & Fancy Theater. 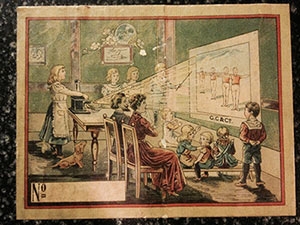 With original antique pictures, hand-painted on glass, combined with widely-recognized stories, the Showman interacted with his audience, bringing multiple characters and voices to life, magically manipulating artistic images against a backdrop of music, sound effects, and sing-alongs.

By the 19th century, the magic lantern widely appeared in theaters, churches, fraternal lodges, and homes. In 1895 there were over 30,000 lantern showmen in the United States alone, giving well over 75,000 performances a year.

Until electricity came along in the 20th century, the lantern was lit by “limelight,” created by heating a piece of limestone in burning gas until it became incandescent. Although dangerous, it could project images large enough to be seen by thousands of people.

Over 100,000 toy children’s lanterns were sold each year in America and were enormously popular Christmas presents. 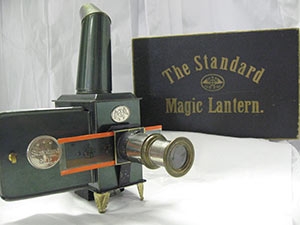